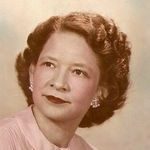 Mrs. Wood had been a resident of Red Bay since 1977. She was Baptist by faith and a member of the Red Bay Baptist Church. She enjoyed sewing having worked as a seamstress for many years. She enjoyed spending time with her grandchildren and fishing.

Mrs. Wood was preceded in death by her father and mother and husband John Travis Wood.

A time of visitation will be held at 6:00~8:00 PM, Friday, November 16, 2007, at Clary-Glenn Funeral Home Chapel; 230 Park Avenue DeFuniak Springs, Florida 32435. Funeral services will be conducted at 12:00 PM, Saturday, November 17, 2007, at Clary-Glenn Funeral Home Chapel, with Dr. Art Luckie officiating. Burial will follow in the Red Bay Cemetery. Floral arrangements are being accepted. Those asked to serve as pallbearers are as follows Jeff Wood, Ross Luckie, Art Luckie, John Wood and Jim Poss.