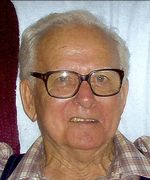 Mr. Hinson was a lifelong resident of Walton and Holmes Counties. He was a veteran of WWII serving his country in the United States Army having been awarded Two Overseas Services Bars, The Asiatic Pacific Campaign Ribbon and Philippine Independence Ribbon. He worked as an electrician having owned and operated Hinson’s Appliance Service. He loved to hunt and fish and he loved animals.

Mr. Hinson was preceded in death by his father and mother.

A time of visitation will be held at 6:00~8:00 PM, Friday, November 2, 2007 at Clary-Glenn Funeral Home Chapel; 230 Park Avenue DeFuniak Springs, Florida 32435. Funeral services will be conducted at 11:00 AM, Saturday, November 3, 2007 at Clary-Glenn Funeral Home Chapel with Reverend Glen Spence officiating. Floral arrangements are being accepted. Those asked to serve as pallbearers are as Tommy Thompson, Billy Thompson, Aaron Thompson, John Alford, Ronnie Crosby and Donnie Crosby. Burial will follow in the Pleasant Ridge Cemetery.