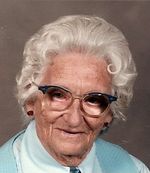 Mrs. Miller was a resident of Freeport for over 60 years before moving to Milton. She was Baptist by faith and a member of the First Baptist Church of Freeport.