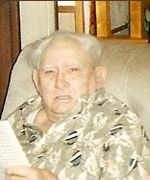 Mr. Davidson was a lifelong resident of Walton County. He was Assembly of God by faith and a member of Bruce Assembly of God Church. He was a veteran of WWII serving his country in the United States Army, having fought at the Battle of the Bulge in the 101st Airborne Division. He worked as a Long Shoremen and Stevedore at the Bay Harbor and Port Panama City for 37 years. He enjoyed fishing and was an avid outdoors man. He also enjoyed visiting having received the nickname “Radio” because of his love for talk. He also loved gospel music and attending gospel sings.