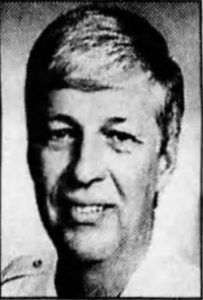 Jimmy Kelly passed away surrounded by family and friends in his home on Sunday, November 20, 2005, at the age of 61.

He was born August 4, 1944, in Defuniak Springs, FL. Jimmy served his country and his community, first in the United States Army as a Sergeant in the military police, then for 28 years with the Pensacola Fire Department attaining the rank of Captain.

Jimmy was a member of the Masonic Lodge 15 as a 32nd Degree Mason. He was a Hadji Shriner, and a member of the Bellview United Methodist Church. Jimmy loved life and believed in living it to the fullest. He never went halfway with anything he undertook: bow hunting, fishing, scuba diving, golfing, camping and even hiking the Appalachian Trail. Jimmy believed in giving life 100 percent. He was even more devoted to his family. He loved his wife, was a great “daddy” to his daughter and even greater “DaDa” to his grandchildren, his “Best Buddies”. He always made time for family and friends.

His parents, Sebron S. and Callie B. Kelly, precede Jimmy in death, as well as sisters Orene Slaey, Lillian Mims, and Olga Kelley. Jimmy is survived by his wife of 39 years, Jane Kelly; his daughter, Sarah Elaine Chisenhall and her husband, David, and his best buddies, John and Kaitlin Chisenhall; brothers, S.S. (Vera) Kelly, Watson (Lea) Kelly and Lewis Wayne Kelly; his sisters, Betty Ely and Judy (George) Hayes; many nieces and nephews; and his beloved cats, Max and Tabby.

Visitation will be from 10:00 a.m. until the service time at 11:30 a.m., Friday, November 25, 2005, at Harper-Morris Memorial Chapel. Pastor Norman Brown officiating with Father Viet Huynh assisting. Burial will follow at Barrancas National Cemetery.

In lieu of flowers, donations may be made to Covenant Hospice of Pensacola. Special Thanks to Francis Hill from Visiting Angels, also Kay Slocum, Diann Chisenhall, Jane Lambert, and Johnny Calhoun and Dr. Jim Stringfield.