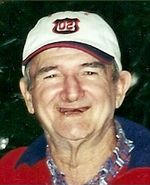 Mr. Prater was a resident of DeFuniak Springs. He was Protestant by faith. He enjoyed spending time with his family and friends and being outdoors.