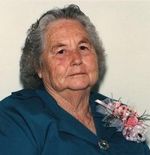 Mrs. Winona Ammons, age 85, of Ponce De Leon, Florida passed away October 23, 2007 at her residence. She was born February 18, 1922 in Caryville, Florida to Carl and Adeline Rushing Ward.

Mrs. Ammons was a lifelong resident of Walton County. She was Baptist by faith and she was the oldest living charter member of Pleasant Valley Baptist Church. She worked as a housekeeper at the Walton County Hospital for over 20 years before retiring. She loved growing flowers, taking care of her dogs, cats, birds and fish. She especially enjoyed taking care of her grandchildren and great grandchildren. Mrs. Ammons was preceded in death by her father and mother, her husband Marion Ammons, one daughter Eloise Ammons; three brothers Lamar Ward, Hubert Ward and an Infant Brother and one sister Melrene McCormick.