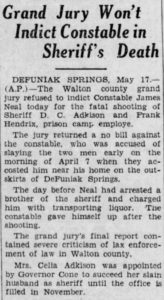 The jury returned a no bill against the constable, who was accused of slaying the two men early on the morning of April 7 when they accosted him near his home on the outskirts of DeFuniak Springs.

The day before Neal had arrested a brother of the sheriff and charged him with transporting liquor. The constable gave himself up after the shooting.

Mrs. Celia Adkison was appointed by Governor Cone to succeed her slain husband as sheriff until the office is filled In November.